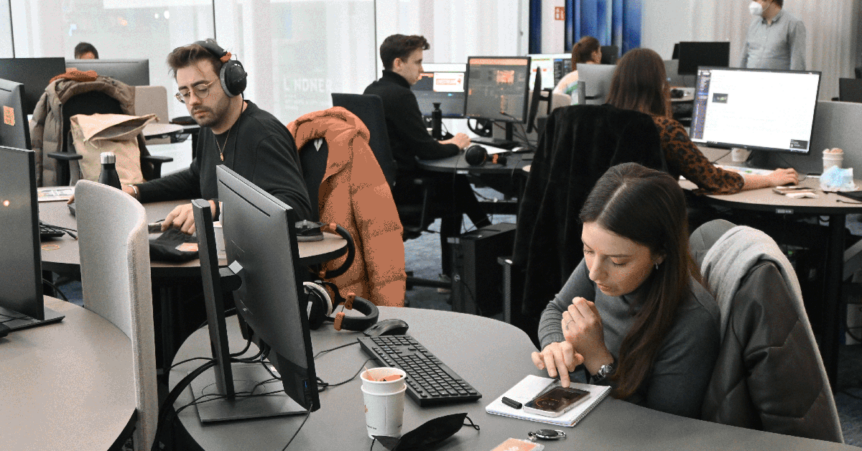 Back in the day, you didn’t have much choice. You could read your daily newspaper, watch the evening news on TV, or listen to the radio as the fastest medium available. News sources were scarce so they were in control: the times of consumption got decided for the consumer. However, we all know times have changed! Let’s deep dive into how news gets produced and consumed today.

Due to technological evolutions such as digitalisation and the arrival of the Internet, newsrooms have changed drastically. You see new small online newsrooms popping up every day, adding to – or even replacing the long-time linear news studio. In addition, typical newspaper editorial tools are changing towards a CMS (Content Management System) for a website. News brands all around the world have launched apps and sites offering non-stop news flows with easily accessible content through our smartphones. Consequently, newspapers have become a by-product of the 24/7 online news flow.

The news is everywhere, at any time. Social media offer an almost one-on-one news feed based on data-driven algorithms. The tables have clearly shifted: within a networked frame, the consumer has the power now and can for themselves choose what to see, wherever they are, from any source they want.

For television news, the biggest change you can see is the move from ‘rundown-centric’ production to ‘story-based’ working. In the past, a television newsroom was focusing on 1 product only: live newscasts two or three times a day. Each had one rundown, and all content was meant for that rundown.

However, as mentioned before, times have changed. These same TV newsrooms are now adopting a story-based flow: each piece of produced content belongs to a story. With the necessary adjustments, this story can be distributed on various output channels such as social media, websites, or in newscasts.

The content gets kind of ‘recycled’ in different aspect ratios, tone of voices, and lengths per output platform. You don’t use the same video on Instagram for immediate release in the morning as the video you edit for the evening news. This is story-based working: when a story breaks, you start to produce different pieces of content based on the same source material for different platforms and times of the day.

Online news is a different beast altogether. Many other competitors have entered this arena. The classic TV news is present, of course, but many independent companies have started online news platforms prioritising video thanks to the low costs of the internet. Think about Australian Ticker News or Belgian HLN Live as an example. With their handy, all-in-one automated studios facilitated by TinkerList, these web studios can prepare and broadcast professional news shows operated by one journalist only. Have you heard of our One-Man-Band studio? Have a read here.

For a full comparison between the linear and online news studio, please read this excellent blog!

We also see broadcast news is always looking for more ways to visualise a story. Next to the classical infographics, AR (Advanced Reality) techniques to illustrate stories gain in popularity. Such evolved storytelling tools are expensive and require a lot of integration. Therefore, you’ll probably see them first in broadcast environments but the possibilities are near endless.

We think technology is evolving fast and web studios will pop up more and more. More news outlets will implement them and start competing in the news market. Your audience is on the outlook for news when it breaks, with as much video as possible. So you better be ready!