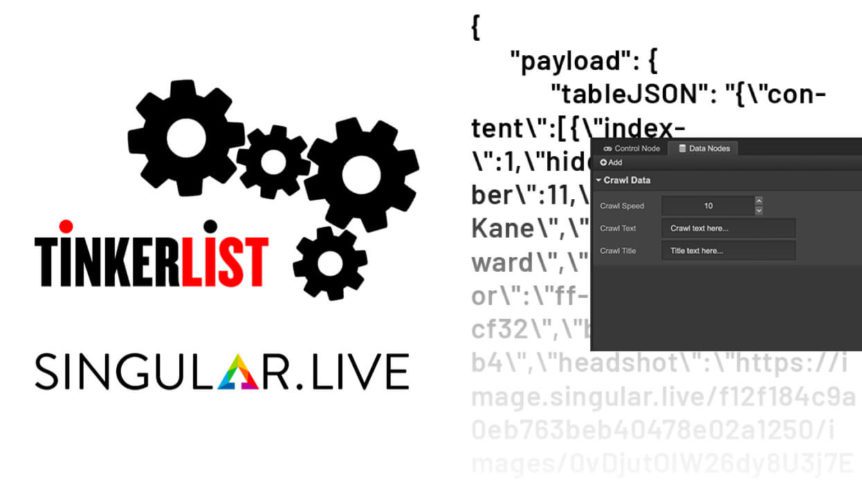 It’s not a secret that TinkerList integrates with a variety of technologies to make our platform as operational as possible. One of our integrations, more specifically the graphic overlay platform Singular.live, probably sounds familiar to you. In this case study, we will talk about how one of our clients uses both platforms to create a cutting-edge production environment — managed by a single person!

Singular.live is the world’s most advanced graphic overlay platform enabling anyone to create live, animating overlays quickly and easily from a standard web browser. Developed by multi-award-winning industry experts, Singular is the fastest-growing cloud-native graphics platform. Already trusted by many of the biggest (and smallest!) brands in media, Singular is the only live graphics platform accredited for sustainability and works in any SDI, NDI or IP/cloud workflow.

Singular.live is one of the few software options in the industry that doesn’t require thorough technology training to be able to use it. Its sophisticated features are easy to understand, easy to test and, most importantly, easy to use. Moreover, its straightforward API and good price/quality ratio make the platform very popular to work or integrate with.

The idea of a one-man band at DPG Media has been around for a while. Two years ago, DPG started experimenting with such an automated studio where journalists could just hop in at any time, record, do interviews, show images and videos and broadcast their show basically on their own.

For graphical content such as names of people talking, locations, titles etc, they first used TriCaster. However, they quickly changed to Singular.live for the various reasons such as the smooth transition to the platform for new team members without experience, the fact that Singular is cloud-based and the ease of integration thanks to its reliably documented and clear API.

We’re extremely happy to work with both DPG Media and Singular.live for the operation of the one-man band newsroom.

During the broadcast itself, you can do two things: you either trigger every media manually or you configure everything beforehand and run the automation. We do the latter with our one-man band setups.

Thanks to our automation and integration with Singular.live, the presenter has to simply press the spacebar when the name of a person or a location should appear. We can easily create templates, configure graphics for the broadcast and trigger our automation to play them at the right time.

Camera cutting to the person that is speaking also happens automatically thanks to our smart algorithms that detect voices and cut to the right shots.

There’s a promising future ahead for one-man-band studios and news-making, and we’re totally here for it! Have a look yourself at the one-man band at DPG Media in our interview with the head of technology of News City: Sven Van Vlem.

Also, check out the website Singular.live to find out more about this great platform!