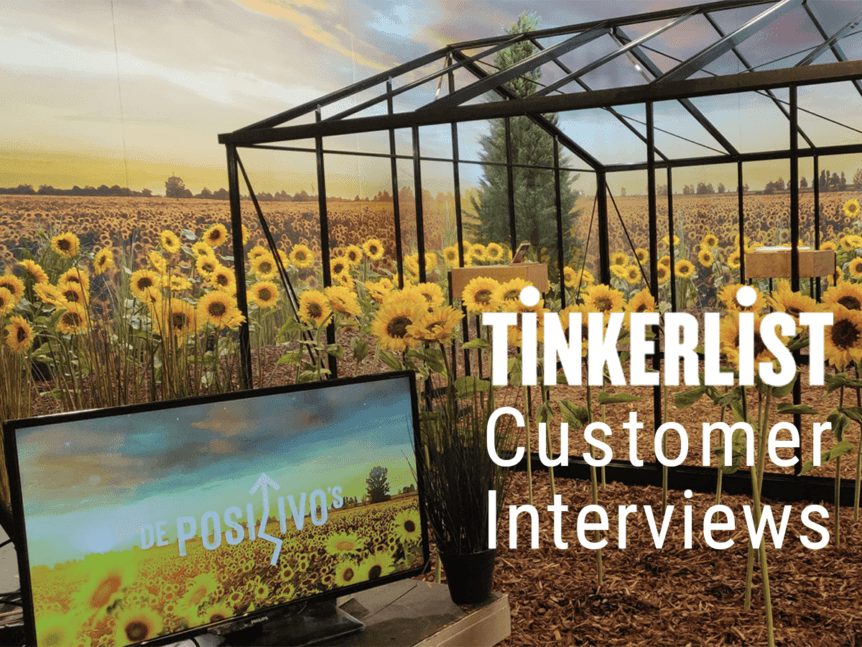 Making a whole season of TV quiz with a production team of 8 people and a budget the price of half a ‘The Masked Singer’ episode? It’s possible! Find out how an automated one-man band studio and a motivated crew got this together in our interview with the series producer of ‘De Positivo’s‘ Tom Bevernage and multitasking button wizard aka director Dirk Van Tilt.

Tom: The idea behind ‘De Positivo’s’ comes from a daily ‘Corona talkshow’. There was a lot of bitterness during the pandemic and so the idea was to look every day for the best news of the day. That is ‘De Positivo’s’.

Why did you use TinkerList for this production?

Tom: I knew I was going to get 3 or 4 producers but I didn’t know any of them and before I threw myself in it, because I used to make a lot of quizzes, I wanted to have as much overview as possible. And so I knew TinkerList and I found it ideas as you could put everything in the database per round.

It’s very convenient as a series producer that you can let all your producers in that database and you can intervene at any moment in the workflow. You can intervene at an early stage which comes in very handy for a daily quiz. We produced it on a very short notice as well but you could trace the problems quickly and put everyone on the right track. There’s many tools in TinkerList to drag files from drafts to official versions or to work with a flag- or colour system to assign content to people, stages, versions, the bin,…

The platform unfolds itself for you. You can follow along visually very well the progress you’re making. I like that.

Dirk: Yeah that was really handy for me too as I arrived around 2pm and the first thing I did was open TinkerList, quickly read it through, and check useful images. This meant that we only gathered by 4pm, checked what was ready and ran TinkerList in the studio for a first time while Tom was still working with the producers on the content. In that way I could focus on the studio.

And then half an hour before the broadcast we gathered one last time to verify if all the necessary changes and adaptations were made. It was a big advantage for me to be able to follow what the producers were doing remotely. I didn’t need to be there.

How was it to work with such limited means and crew?

Dirk: It required some concentration but in se, if your TinkerList runs automatically, and you can easily follow the sequence of items and all images are ready to be cued so you just have to press a button on your mixer, it actually is just preparing buttons. In that way you can focus on mixing cameras, which is a ‘daily business’ for me and doesn’t require too much thinking.

Therefore you can focus purely on your show. The program runs itself. All content is set up beforehand. During all those weeks we broadcasted, we never played an item at the wrong time as the program ran automatically. I had a really small mixer, like the tiniest Skaarhoj you can get. I did the whole show on that thing which was completely miraculous as there were camera controls added from week two.

I controlled the cameras with my right hand, I had a ‘cutting row’, a ‘preview row’, and I had a small corner for TinkerList to press play, press twice to start items,… Erik came to add a lot of cards to the system. The week before the start we added many cards tailored to our show, which was necessary and which made it very efficient.

How much money did you save in this production?

Tom: Actually what you saw on TV, the production value, that was because of the decor and the graphics of the scores. Because everything was developed so last-minute we didn’t have the time, there wasn’t a budget for it anyways, to sync the graphics with the game. So that was literally someone with a powerpoint, a producer sitting next to me. The scoreboard was like the Corona curves that were in the news every day. The graphics were very silly.

The show wasn’t a success and I think that’s because of the clumsy graphics. But all this has nothing to do with what Dirk did. No viewer noticed that there was a limited budget for what he had to do. You noticed the limited budget in the decor and graphics but not in the imagery.

Dirk: We learned there that you don’t need to be with many to make a TV show.